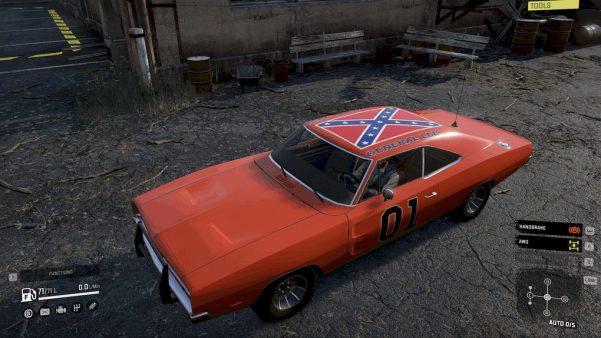 The General Lee (sometimes referred to as simply “the General”) is an orange 1969 Dodge Charger driven in the television series The Dukes Of Hazzard by the Duke boys, Bo and Luke, along with cousins Coy and Vance (in season 5). It is known for its signature horn, its police chases, stunts—especially its long jumps—and for having its doors welded shut, leaving the Dukes to climb in and out through the windows. The car appears in every episode but one (“Mary Kaye’s Baby”). The car’s name is a reference to American Civil War general Robert E. Lee. It bears a Confederate Flag (a rectangular variant of the square battle flag of Lee’s Army of North Virginia) on its roof, and also has a horn which plays the first 12 notes of the song “Dixie”

The idea for the General Lee was developed from the bootlegger Jerry Rushing’s car, which was named for Lee’s favorite horse, Traveller. Traveller was also the name of the car in MoonRunners the 1975 movie precursor to The Dukes Of Hazzard.